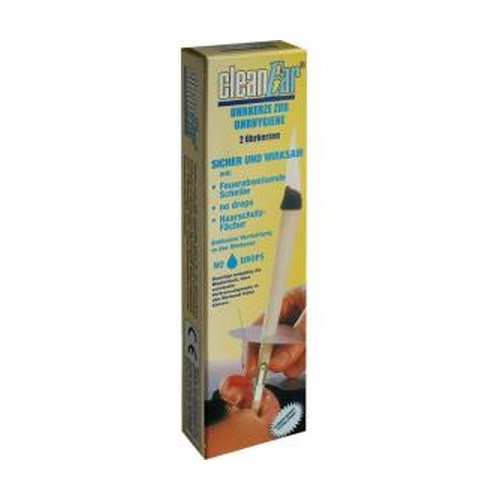 You can return your product, if it has not been used and in its original packaging, within 14 days from the confirmed delivery date of the order.

We will explain how the order returns work step by step:

How can I request a refund?

Cleanear Candle ears made of 100% pure cotton and sterile wax.

The ear hygiene product, thanks to slow combustion, produces heat and this allows the ear wax to melt and, as a consequence, through a small decompression, beneficial to the ear (chimney effect), removes it with the other remains, facilitating the physiological and natural expulsion of the wax plug. Too much wax can cause discomfort, such as tingling, hissing, and itching.

The following steps are recommended:
1 - Verify the presence of the No Drops device inside the cone. Insert the cone into the hole in the Flame Breaker Disc until it locks, with the aluminum toward the widest end of the cone. The disc should not be removed during use.
2- Place the head on a flat surface (table or similar) so that the ear is horizontal. Apply the hair protection device.
3 - Carefully insert the narrowest part of the cone into the ear in a circular motion so that it closes tightly. Hold the cone vertically by hand without changing its position throughout the application.
4 - Light the wide part of the cone and let it burn slowly. If smoke comes out of the ear, it indicates that the cone has not been inserted correctly or has moved. In this case, blow gently to remove the smoke from the face, do not remove the cone, but put it back in the correct position so that the smoke stops coming out. When the flame reaches approximately one centimeter of the flame rupture disc, the application is completed.
5 - Carefully remove the cone and place it in a glass of water. The residues deposited within the part of the cone that did not burn are residues of the combustion of the cone itself.

Read the instructions for use carefully.
The use of the cone is not recommended for children under 12 years of age.
Consult an otolaryngologist in advance to confirm the presence of a wax plug and to verify if any discomfort is due to this reason and not to other ear pathologies.